Insects in olive orchard: let’s have a look at them!

You are here: Home1 / Insects in olive orchard: let’s have a look at them!

Insects in olive orchard: let’s have a look at them! 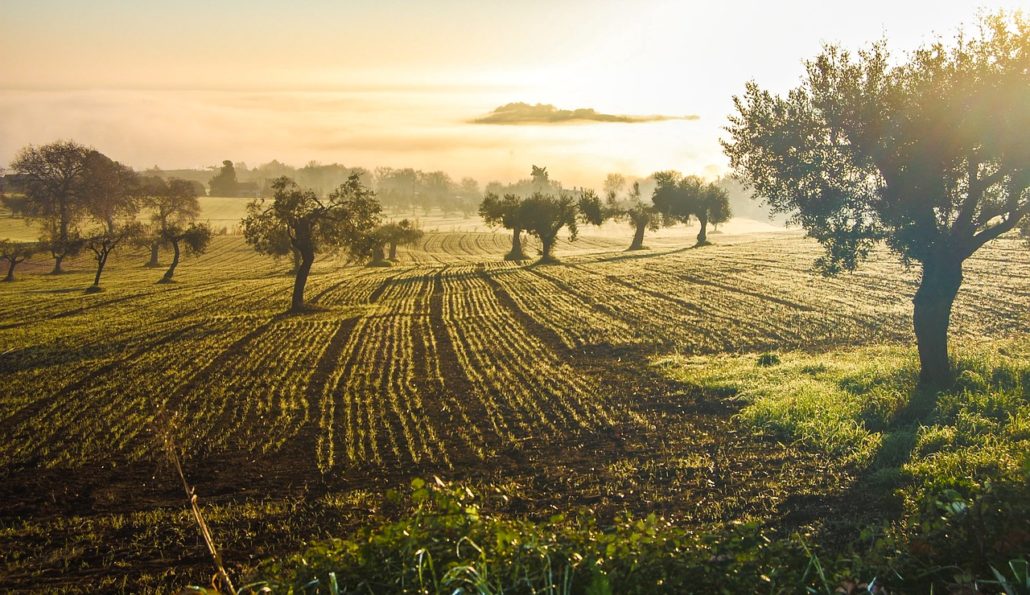 Olive tree has left a mark in the history of human civilization: it has become not only the source of a leading food of many Mediterranean countries (with the famous olive oil), but it also become a real symbol of peace and wisdom.

There are olive trees in Plato’s academy, in the Bible, in the logo of the Italian Republic, in the UN flag and so on. It is not surprising then to see the respect that farmers have for this plant, respect that goes beyond mere economic value.

From an agronomic point of view, various insects threaten the production and the healthiness of olive orchards. The best way to face the problems they can cause is knowing these unwelcome hosts.

Insects in the olive orchard

Maybe the most unwelcome insect is a small Tephritidae: Bactrocera oleae, better known as the olive fly. We have talked a lot about it here both from an entomological point of view and regarding the smart farming tools to fight it.

But is it true that the fly is the most unwelcome insect? It depends on where we are. In Salento (southern Italy), as in other areas affected by Xylella fastidiosa, the nightmare of olive growers is Philaenus spumarius (fig 1B), the main vector of the pathogen (read the dedicated article).

There are also the scale insects, hosts of several fruit plants. In olive orchard we fight mainly against Saissetia oleae (fig 1A) and with Lichtensia viburni. The damage here is direct and indirect due to the abundant production of honeydew (sugar droppings), which is then a substrate of fungal diseases and other pathogens. 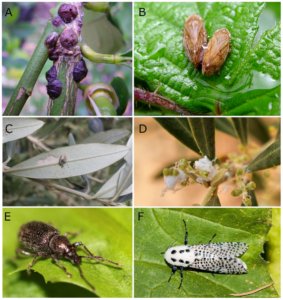 The list then goes on with Prays oleae (fig. 1C), a small phytophagous lepidopteran that feeds on various organs of the plant; Liothrips oleae, which symptoms of an attack include a poor development of shoots and leaves that take on hooked forms and fall off prematurely; Euphyllura olivina (fig 1D), Psillidae easily recognizable by the abundant production of honeydew and waxy secretions.

Otiorhynchus cribricollis (fig 1E) is a weevil that attacks the leaves of olive and other fruit trees biting the leaf margin. Dasineura oleae is a fly that produces galls (excrescent malformation) on young leaves.

Phloeotribus scarabaeoides digs tunnels under the bark at the intersection of the branches. Palpita unionalis is a lepidopteran whose larvae feeding activity leads to the loss of leaves. When mature, the larvae become crysalids inside a shelter formed by silky wires.

The list ends with two woodminer: Zeuzera pyrina (fig 1F) and Cossus cossus. Here it is easy to guess the damages of these lepidopterans of considerable dimensions whose larvae live in tunnels dug in the woody parts of the plant.

There are many olive tree’s host insects: a small part of them (which we have taken into consideration here) are potentially harmful. These small clues can help us to understand who is in the plant and eventually take targeted action.

Given the strategic importance of the olive tree throughout the Mediterranean area, there is a strong interest in finding alternatives to pesticides: precision agriculture supports every day many olive growers with sophisticated and smart solutions.

Do you want to know more on Agricolus platform’s features for olive orchard?

Vector insects in the vineyard: what kind of damage can they cause?

Would you like to know more about all the advantages of Agricolus to manage your fields efficiently?